Spanish as the official language or national language

In these countries and territories, Spanish is the main or only language of communication of the vast majority of the population; official documents are written chiefly or solely in that language, and it is taught in schools and utilized as the primary medium of instruction as part of the official curriculum. 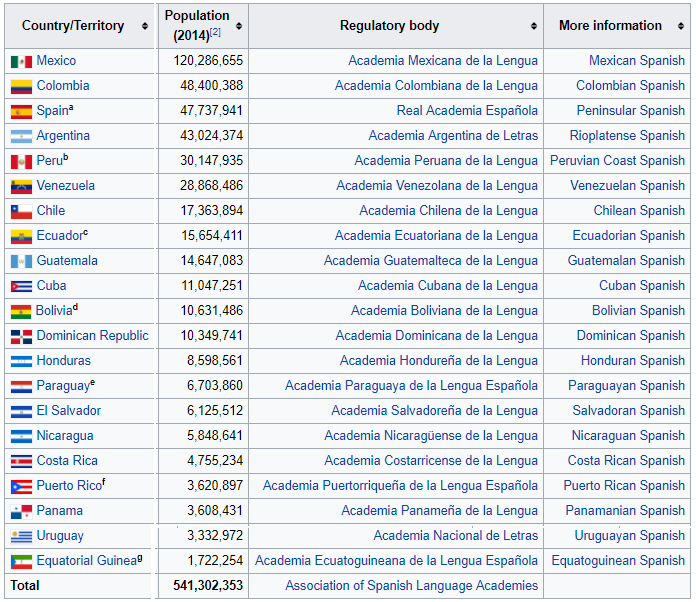 Spanish has been spoken in the United States for several centuries, particularly in the Southwest and Florida, which were all once part of New Spain. Spanish is the most studied foreign language in United States schools and is spoken as a native tongue by 41 million people, plus an additional 11 million fluent second-language speakers. It is also de facto official in the U.S. state of New Mexico along with English and is increasingly used alongside English nationwide in business and politics. With over 50 million native speakers and second-language speakers, the United States now has the second-largest Spanish-speaking population in the world after Mexico. In the United States, it is regulated by the North American Academy of the Spanish Language.

The Spanish language is not official but also holds a special status (in the education system, the media, and some official documents) in the Principality of Andorra and the British Overseas Territory of Gibraltar, both of which share land borders with Spain. Spanish has no official recognition in the Central American nation of Belize, a Commonwealth realm where English is the official national language. However, the country shares land borders with Spanish-speaking Mexico and Guatemala and, per the 2010 Belizean census, Spanish is spoken by a sizable portion of the population; 30% claim Spanish as a mother tongue and about 50% of the population has a working knowledge of the language.

Spanish was an official language of the Philippines from the beginning of the Hispanic period in 1565 and through independence until a constitutional change in 1973. However, President Ferdinand Marcos had Spanish redesigned as an official language under Presidential Decree No. 156, dated 15 March 1973 and Spanish remained official until 1987 when it was re-designated as a voluntary and optional auxiliary language.

Want to join the discussion?
Feel free to contribute!

¡Ay bendito! The No. 1 song in America is sung in Spanish

The Spanish School for Expats has always done more for students than just teaching...
Scroll to top